After arriving in Kampala, Uganda, and spending the night, it was a 6 hour drive to Gulu in the northern area of the country.  There were so many different thoughts along the way, but most notable are all the conversations with You, Lord.  I am not quite sure why I am here, but I do know two things.  I am definitely supposed to be here, and You are doing something in me, within me, or to me.  After reading Acts 1 and 2 this morning I pondered a lot of things about how the church operates today.

Arriving at the Watoto guest house in Gulu brought back memories of the year before…children collecting White Ants for protein, and of course, Annie.  Annie is about 12-14 years old, and how I thought of her throughout the year. Last year she was sitting on the dirt ledge in front of her house with a big smile, but with contracted extremities from the stroke she had some time before.  Why a stroke in such a young girl, some have asked.  Another one of the painful results of sickle cell anemia. After praying for her last year, I came with expectation, and what a joy to see her sitting up as she had been unable the year before!  As I jumped out of the bus and started running to her, it was an equal joy to see her sister come running toward me with open arms.  It could have been a scene from a movie when long lost friends embrace after a long separation.

What an awesome worship service at Watoto church, then lunch, and off to the Watoto children’s village.  It was quite a distance from town along a dirt road laced on both sides by nothing but greenery, papyrus, cultivated fields, and the endless march of natives walking, many with their water jugs or wares on their heads.  The village was quite extensive with the children’s homes, a school, and a clinic.  Then as we were leaving 2 young men asked for a ride to a village on the way back to town.  Simon sat near the front and his brother Dennis near the back.  After a few minutes of chatting, we found out Simon’s father died a few years ago and he was now living with his grandmother and 4 others in the house.  They own 60 acres of land, but can only farm 3 acres because it all must be done by hand.  If they had an oxen (about $285 USD) they could farm the entire 60 acres and help the economy of the whole community.  Finally I asked Simon if he knew Jesus as his personal savior.  He said he didn’t know what I meant, and that he went to the Catholic church.  He then said that when his grandmother was sick and weak she told the whole family they needed to get saved, but no one knew how.  I explained to Simon why Jesus died, how He paid for our sins, and asked Simon if he wanted to receive Jesus as his savior.  He said that he did, prayed the “sinners prayer” and we then prayed for him.  After giving him a Bible, he was stepping off the bus, and said, “What about my brother?”  I then replied that “He must want it for himself.”  His brother Dennis then chimed in “of course I do!”.  He then prayed to receive Jesus as his savior.  Simon then asked if we could go to his house so the entire family could get saved, but after about 6 kilometers, the path narrowed to much to accommodate the bus, so we said we would return Wed afternoon with a smaller vehicle.

This was our first clinic day.  After waking in the wee hours of the morning and praying for over an hour, I asked God why He uses people when He can do it all.  It felt almost as if He laughed and responded “It is not for ME, it is for YOU!”.  That lightened up clinic quite a bit for me as we treated 134 patients, performed 12 ultrasounds and prayed deliverance for 2 people.

Amidst the 141 patients seen in the clinic today 2 stand out in my mind and heart.  Betty had her lips cut off by the Kony rebels in 1991. She has had some plastic surgery, but needs something more.  A large keloid (scar tissue) has formed at the reconstruction area of her face. Amazingly, she has been able to not only forgive the man who did it to her, but she prays for him as well.  Also today, as an aside, when we went into town, there was a poorly dressed woman with a walking stick and a deformed right foot walking down the street.  She stuck out her hand and then rubbed her belly, so I went and bought her a meat pie and delivered it back to her.  I often think of the verse in Hebrews 13:2 “Don’t forget to show hospitality to strangers, for some who have done this have entertained angels without realizing it!”.  It was very impressive as well, to see Ugandans offering alms to local beggars.

Next heartfelt surprise in clinic today was Monica and her Auntie.  I was told Monica was 18 years old, an orphan, and had given up on prayer.  When I went to see her, she indeed looked depressed, joyless, and in a deep state of despair.  When her parents died her aunt had taken her in and paid for school from 2nd-6th grade.  Then her Auntie went blind.  Since then Monica can’t go to school because she is the only caretaker of her Auntie.  After a few questions it became evident that voices were telling Monica that she was worthless, etc.  After a brief description of Jesus, the Gospel, and how His work on the cross was complete, she was ready to receive Jesus in her hearts.  She still had a very zombie-like countenance, so I stressed the fact that we were not trying to “talk her into” anything and I didn’t want her to say anything she didn’t mean.  She said no, that she DID want Jesus.  And after saying the sinner’s pryer and having us pray over her, her entire countenance changed.  She became joyful and eager to learn more.  We bought her a Bible and then her Auntie asked if we could “connect” her with the Living Hope ministry….and we did! 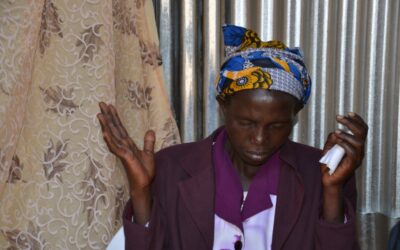 It seems that progress is being made when we arrive at Baharini, a rural mission church plant from a local larger...

As founders of Hearts Afire we unanimously decided based on the prompting of God that we must send in a team.  Being...