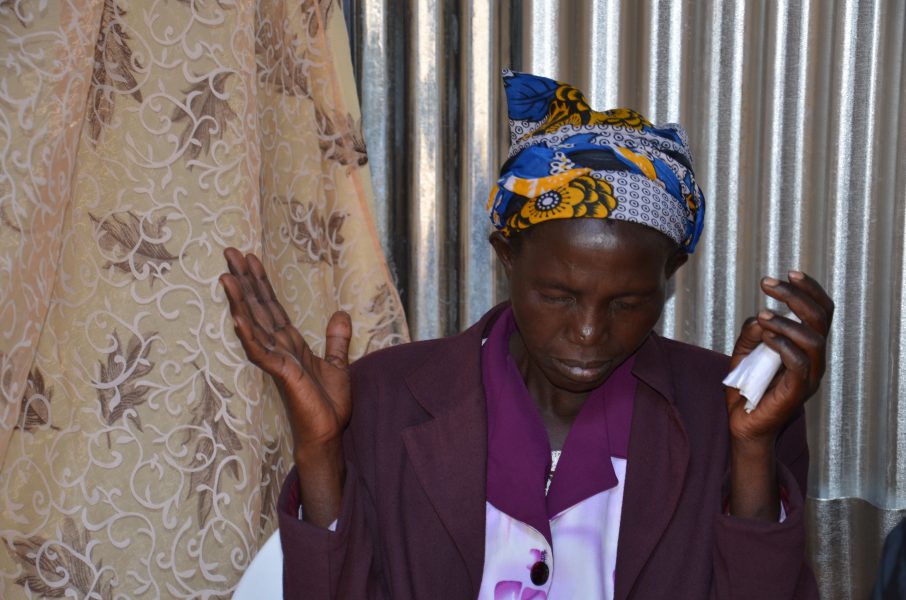 It seems that progress is being made when we arrive at Baharini, a rural mission church plant from a local larger church with whom we partner. After all, last year’s tent was replaced with a solid frame structure built of corrugated aluminum.

Clinic started as usual, arrive by bus, almost 100 people in torn and tattered clothing waiting on benches outside in the grass while the church, just a few meters lower down the hill is framed by blue skies on top and on the sides by the vast cornfield in which it rests.

The church is serving today as our HIV testing lab, clinic, pharmacy and prayer station. In fact, a team arrives to construct an additional tent outside that will serve as a pharmacy, filled with tables of medication empty from suitcases and viewed by many of the locals as their only source of relief from the aches, pains and infections that have become a routine expectation of rural life in Kenya.

Enter the church with me… The dirt clay floor is firm, but uneven. The pulpit is visible on the far end and a hallway down the middle is the result of the three rooms on each side constructed for today using whatever cord was available. One may have been someone’s curtains. Some of the other cloths may have been bedsheets at one time, or who knows? Each fragment of this living quilt likely carries with it a lifetime of memories.

Today, though, behind sheet number three a life will walk through a spiritual prison of bondage into freedom.

The medic calls me in to see 12-year-old Babra whose head, forehead, sides of her face, ears and eyelids are all covered with scabs. The child is HIV-positive through no fault of her own; she was born with it. Her mother solemnly sits to the left, shrouded in guilt and shame. She hopes that somehow if her daughter can be helped the reminders of her past will be erased; it can’t be changed. But her future will! And any joy she may have once had has been buried in the grave of shame.

After finding out that little Babra’s condition was not due to herpes (she had just been tested) I explained the treatment plan to the mother. She still sat staring almost blindly without emotions and without expressions.

I was impelled by the Holy Spirit to help the mother because she clearly needed as much help as her daughter (although in a different way). She agreed to have us pray for her. We prayed to release her from the spirits of guilt and condemnation amongst others. As we prayed little Babra, tears flowing down her scabbed face, joined us in the quest for unshackling the chains of her mothers past.

As we prayed, the mother began to contort in her chair, nearly convulsing and started pouring out sweat as she tore at her clothing to remove the two outer layers. She lay totally exhausted in the chair for a few seconds and erupted a smile that had presumably been buried for years. Then she turned and said to the translator, “I’m free!” Her countenance exchange lies for the truth and she even appeared so different that one of the team members in the room praying with us didn’t recognize her when she saw her only minutes later.

God is good and loves us so much He shows it in a variety of ways.

← Prev: Remember, you aren't a stranger, you're a messenger. Next: USF Winter Magazine →

June 30 After arriving in Kampala, Uganda, and spending the night, it was a 6 hour drive to Gulu in the northern area...

As founders of Hearts Afire we unanimously decided based on the prompting of God that we must send in a team.  Being...